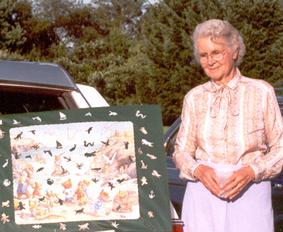 Pagey Elliot with one of her creations (Circa 1992)
The Pagey Elliott Puzzle Ex​change honors the memory of Rachel Page Elliott (1913-2009), who took up cutting wooden jigsaw puzzles when she was in her seventies. She soon became a top notch puzzle maker. In 2006 The Guinness Book of World Records recognized her for creating the jigsaw puzzle that sold for the highest price ever ($27,000) at a charitable art auction.
​
For twenty years she shared her techniques, artistry, and insights about making jigsaw puzzles with accomplished puzzlers and novices alike. Her dedication to fostering a community for the open exchange of ideas led to the first Puzzle Parley in Concord, Massachusetts in September 1994. The first informal Puzzle Exchange took place in Salem, Massachusetts at 2010 Puzzle Parley under the leadership of Melinda Shebell. The success of the 2010 Exchange brought expanded interest in having another one at the 2012 Puzzle Parley. Anne Williams formalized the process, developed guidelines and organized that Exchange as well as the 2014, 2016 and 2018 Exchanges. She expanded the exchange to include one extra puzzle from each participant that was donated to the Strong Museum of Play in Rochester, NY. as part of its permanent collection. For 2021, Deb Dana organized the first Virtual Exchange where participants showed and described their creations via ZOOM.

​The event continues to keep the memory of Pagey, her brilliant cutting, her sharing of knowledge, and her mentoring of new puzzle makers, alive and well today.

Original Image Courtesy of Rick Tucker
For general information or questions, please contact us at info@puzzleparley.org. ​